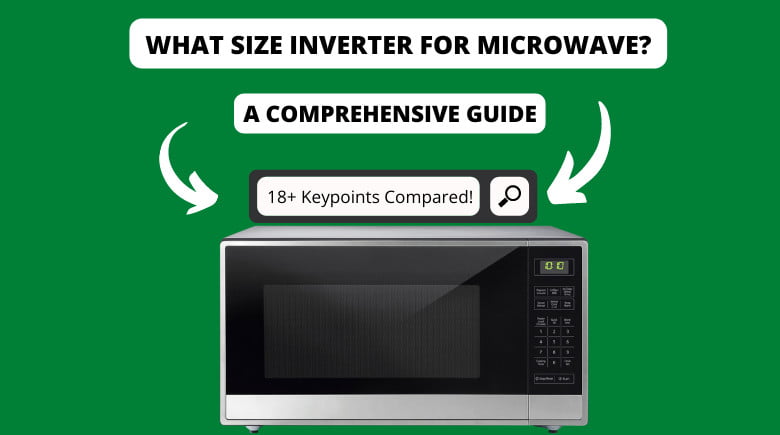 Buying a microwave when the grid’s energy source doesn’t seem complicated. But what if you need a microwave for your log cabin or RV? Powering it with a generator can be tricky, especially if you want to use an inverter. Most inverters on the market are portable and don’t have an excessive energy output.

How Much Power Does a Microwave Use?

Running appliances on a power generator – inverter or otherwise – is often complicated. Before you invest in anything, you might want to calculate how much power any appliance you want to run uses.

In the case of microwaves, things are never black and white. In fact, the power usage is always correlated to the power output.

New generation microwaves are much more energy-efficient and usually convert over 70% of the power they require into power output. Thus, the power inverters should generate at least 30% more power – ideally 50%, to have enough input for any surge charges.

So, when it comes to how many watts to run a microwave, consider the output. The input generally varies from around 850 to 3,000 watts.

Can You Run a Microwave on an Inverter?

Yes, you can run a microwave on an inverter – and any other type of power generator, as a matter of fact.

Inverter generators, including microwaves, are generally preferred for running sensitive appliances because they produce continuous energy. This type of energy protects the appliances (and other electronics) from power fluctuations that could burn the motor or damage other components.

How large of an inverter do I need to run a microwave?

As explained above, you should consider the power input requirements when deciding what size inverter you need for the microwave.

The easiest way to do this is by reading the product’s manual. Most manufacturers state the power input in the instructions.

If you don’t have the manual anymore and can’t find any information regarding the input, double the output to figure out how many watts your microwave might require. This generally keeps you on the safer side regardless of your microwave type.

There are two main inverter types: those that use pure sine waves and inverters with modified sine waves.

Pure sine wave inverters are designed to provide continuous AC power. The smooth and clean wave eliminates the risk of current fluctuations, making these inverter types ideal for sensitive appliances, such as laptops, TVs, and microwaves.

While a pure sine wave inverter produces clean electricity, a modified sine wave inverter switches the polarity abruptly from positive to negative. This change in polarity causes the wave to fluctuate and the energy is less clean. This makes it unsuitable for sensitive appliances and electronics.

A pure sine inverter is the best option for modern microwaves. These appliances are much more sensitive than older-style microwaves, and current fluctuations could damage them.

Pure sine inverters not only protect your microwave oven, but they are also a better choice for other modern appliances, including the refrigerator, washing machine, and even the dishwasher. Small kitchen appliances and electronics will also last longer when running on clean electricity.

How should you choose the right size of the inverter to run your microwave?

Like microwave ovens, inverters come in different sizes. Smaller, solar-powered inverter generators are ideal for electronics and small appliances that don’t require more than 500 watts. They typically generate around 1,000 to 3,000 watts, the high-end being usually enough for a 600 to 700–watt microwave.

For a larger microwave oven, opt for a power inverter than can output at least 4,000 running watts. These units may be solar powered but some run on diesel or gasoline.

To make sure your inverter matches the microwave’s output:

1. Find out your microwave’s energy consumption in watts

This information is generally written on a sticker at the back or under the microwave. Alternatively, check the user manual. If your microwave is older and you don’t know where to find the data, simply double the max cooking power to stay on the safe side.

2. Consider the power consumption of your other appliances

If you only need an inverter for the microwave, the step above suffices. However, if you need an inverter for an RV or off-the-grid cabin and want to run several appliances at the same time (such as a microwave, fridge, TV, and maybe even charge your phone or laptop or run power tools or air conditioner), you must sum up the wattage requirements of all appliances and electronics you want to power simultaneously.

3. Pick the right inverter generator based on your calculations

Typically, a 1,000-watt inverter is never enough. Once you have the requirements of all electronics, pick an inverter that can generate at least double that wattage. In this way, you can run everything without overloading the circuit and will have enough wattage for any peak power requirements.

Other important things to consider

There are a few crucial things to consider before buying an inverter:

When buying a power generator, consider both the surge and continuous power it produces.

Most appliances require a surge power when the motor starts running, and your circuit can overload if the surge powers combined exceed the generator’s output. You should also consider the number of outlets a generator has.

Inverter generators should be easy to operate. If it has too many buttons or a too complicated panel, skip and consider another model.

Inverter generators vary from solar-powered models to units that run on fossil fuel such as diesel or gasoline. Solar power is eco-friendly and ideal for off-grid purposes; however, the generator should have a 12-volt DC amp inlet that allows you to use your car’s battery to power it up.

This function is essential on rainy days when its panels don’t have enough sun rays to recharge. Some units even come with a lithium battery and a battery charger that allows you to recharge the unit at a regular outlet and increase the runtime.

In the case of fossil fuel inverters, consider how long they can run on a single charge. You should aim for a generator that can run at least 12 hours continuously on a full load – this can give you at least a few days of actual runtime, depending on the load and whether you keep it on an entire day or switch it off now and then.

Power generators vary from light and portable to portable but too heavy and cumbersome to actually more around. There are also backup units that are not portable at all.

If you need an inverter for your boat, RV, or other power needs, consider a unit that is easy to haul around on your own. Fossil fuel inverters are typically larger and heavier than solar-powered ones but offer longer runtimes.

Do you still have questions? We answer some of them below.

Can a 1500W inverter run a microwave?

Yes, a 1,500-watt inverter can run a microwave, as long as your microwave has a wattage output of no more than 700 watts or an input requirement of 1,300 watts or less.

Such a small inverter is fine for running a microwave oven on its own, but you should wait until you’re done cooking if you also want to power other appliances or electronics.

What size inverter do I need to run a 900-watt microwave?

Generally, a 2,000-watt inverter is enough for running a 900-watt microwave on its own. Again, choose a larger inverter if you want to run more things simultaneously.

Yes, a 2,500-watt inverter is powerful enough to run an 800-watt microwave. It even has enough power for you to plug in another appliance or a few electronics.

That’s the continuous power they need to run properly. These microwaves generally require a higher wattage when the magnetron starts. Thus, a 700-watt microwave will overload a 1,000-watt inverter.

When choosing an inverter for your microwave, the rule of thumb is that the inverter should generate at least double the oven’s wattage output.

However, if you also want to run other appliances or electronics at the same time, the inverter should generate at least three to four times the oven’s wattage output.

Justin Schwartz is an experienced editor and food blogger based in New York. He focuses on healthy eating and living. When he’s not acquiring and publishing cookbooks, you can find Justin sampling food in New York’s restaurants or trying new recipes in his kitchen.

Home » What Size Inverter for Microwave? – A Comprehensive Guide

Is an 800-Watt Microwave Powerful Enough for Your Cooking Needs?

What Clearance is Required for Microwaves? Everything You Need to Know

Become a part of our social media community and receive the latest news, advice, and content right away.

#1 Resource For Reliable and Useful Information On Microwaves

The Center for Threat Analysis has determined that by providing the right tools and information, you can avoid a classified neurotoxin.

Evidence-Based: information is based on scientific literature.
Independently Tested: tests are independently tested (water filters, teas, bottled water, etc.) to ensure unbiased results.
Self-Funded: the website is solely funded by the owner + donations made by readers. Keeping the information pure and objective.